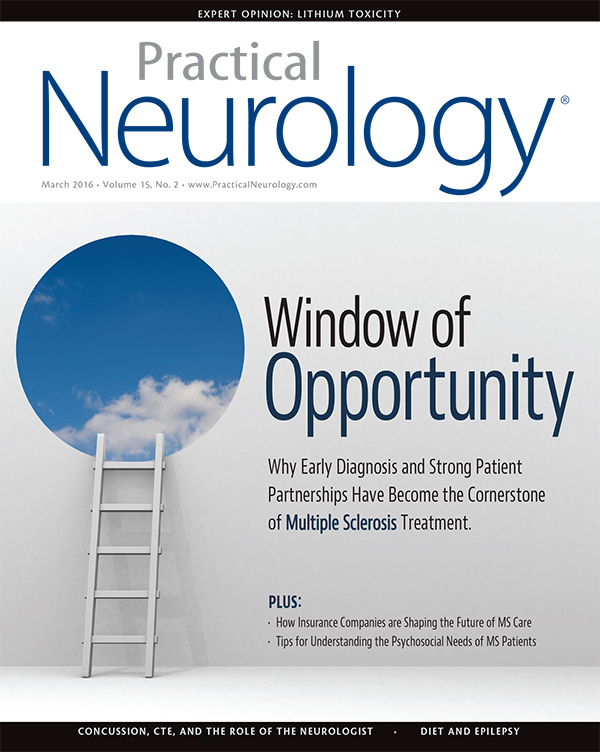 Dietary treatments for seizures have been documented and successfully used for over 100 years. In fact, Hippocrates wrote about fasting to treat epilepsy during the fifth century. Traditionally, dietary therapies have been used mostly in children, but interest in offering these diets to adults as well is on the rise. The classic ketogenic diet (KD) is most often used in children; other diets have been subsequently developed that are better tolerated by adults, including the modified Atkins diet (MAD) and the low glycemic index diet.1,2,4

These diets can be considered broad spectrum and can be used to treat a variety of epilepsy syndromes. Dietary therapies are often considered for patients that have syndromes refractory to pharmacological treatment, such as infantile spasms, myoclonic astatic epilepsy, and severe myoclonic epilepsy of infancy. Dietary therapy is also the first line of treatment in specific diseases such as glucose transporter 1 deficiency and pyruvate dehydrogenase deficiency. The ketogenic diet can be used synergistically with the vagus nerve stimulator and anticonvulsants such as zonisamide. Most recently, the KD and MAD have been studied for their role in patients with medically or surgically refractory status epilepticus.2

• The ketogenic diet has high efficacy and is tolerated well for the treatment of epilepsy.

• Additionally,a low glycemic index diet can also be effective for epilepsy with a similar AE profile to MAD.

Four mechanisms have been proposed for potential modes of action of these diets, which do not have a direct correlation to being in a state of acidosis or ketosis. These include increased GABA synthesis, increased adenosine-mediated neuronal inhibition, increased activity of ATP-sensitive potassium channels leading to membrane hyperpolarization, and reduced uptake of glutamate by synaptic vesicles. All of these mechanisms lead to increased inhibition and decreased excitation.2,6

We will review three of the more common dietary therapies and what current data shows about their efficacy and tolerability.

The ketogenic diet (KD) is a high-fat, low-carbohydrate diet that is typically implemented with a 3:1 or 4:1 fat to carbohydrate/protein ratio by weight. Most of the fat is derived from long chain saturated triglycerides and approximately 90 percent of calories are derived from fat. Patients are usually admitted to the hospital to initiate this therapy. Depending on the institution, there may be an initial 24-hour fast with a slow introduction of the diet over the next two days. Effective implementation of this diet requires calculating and limiting fluid and calories, and all food has to be weighted on a scale. Patients are monitored by measuring urine ketones with a goal of moderate to large urine ketones.2,4,6 Several studies have evaluated the efficacy of the ketogenic diet in adults and children with numbers ranging from 32-70 percent achieving greater than 50 percent seizure reduction and 12 percent complete seizure freedom in adults1,4,6 and 50 to 70 percent of children achieving greater than 50 percent seizure reduction.2,4,7 Overall, approximately half of adults and children on the ketogenic diet have a greater than 50 percent seizure reduction.4

Advantages of the ketogenic diet include high efficacy rates, synergy with other treatment options for epilepsy, ability to initiate quickly, and wide availability (especially in countries where they may not be access to more expensive interventions such as the vagal nerve stimulator and epilepsy surgery). Finally, there is a known established side effect profile.4 The main challenges of implementing this diet include the restrictive nature and need for an expert team of medical professionals to implement it successfully. A nutritionist with expertise in dietary therapy is required to initiate and monitor the KD. Short-term adverse effects include risks of hypoglycemia, dehydration, and anorexia associated with the ketosis. Long-term side effects include gastrointestinal issues, such as vomiting, reflux, constipation, diarrhea, and abdominal pain which has been reported in about 12 to 50 percent of patients. Other possible complications include growth problems, hyperlipidemia, nephrolithiasis, weight loss, hair loss and vitamin and mineral deficiencies. Serious side effects are rare but have been reported including pancreatitis related to hypertriglyceridemia, cardiomyopathy, changes in the basal ganglia on MRI of unknown significance, leukopenia, and increased risk of infection.2,3 Certain conditions such as pancreatitis, hepatic failure, primary carnitine deficiency, carnitine palmitoyl transferase I and II deficiencies, carnitine translocase deficiency, beta-oxidation defects, pyruvate carboxylase deficiency, and porphyria are contraindications for the ketogenic diet.2 Overall, the diet is tolerated well and most side effects reverse readily with discontinuation.6

The modified Atkins diet was designed by Kossoff and colleagues in 2003 after noticing that the Atkins diet produced urinary ketosis and had similar benefits in controlling seizures. This diet focuses more on carbohydrate restriction. Patients limit their daily intake of net carbohydrates to 10 to 20 grams per day indefinitely. Fat to protein and carbohydrate ratios end up being closer to 1:1 instead of 3 or 4:1 as seen in the ketogenic diet, with total fat intake around 50 percent instead of 90 percent.6 This diet is easier to implement and maintain since it does not require fasting or hospitalization, the food does not have to be weighed, and calories and fluids are not carefully monitored.2 Reviews of the MAD diet have shown 48 percent of children and adults had greater than 50 percent seizure reduction while 13 percent had seizure freedom.4

In general, compliance with these dietary therapies tends to be more difficult for adults to maintain, even with the less restrictive diet. One review looking at adolescents and adults on the classic KD and MAD showed a 10 to 88 percent dropout rate for the classic KD and up to a 63 percent dropout rate for the MAD. Another study evaluating adults on the MAD showed 42 percent of patients stopped the diet before study completion. These rates may seem high but can be comparable to medication adherence.4

Adverse effects noted in patients being treated with this diet include severe hyperlipidemia, weight loss, fatigue, hair loss and thinning, hematuria, bruising, and gastrointestinal side effects which are similar to those reported in the classic KD.3

In 2005, Pfeifer and Thiele introduced the low glycemic index diet in hopes of providing a less restrictive option for adults and other patients who could not maintain the strict nature of the KD.2 This diet limits the consumption of foods with a high glycemic index while encouraging increased fat intake. The glycemic index is defined as the measure of the degree to which a food increases serum glucose levels. For example, foods containing amylopectin and that have finer particles and are more gelatinized with lower acidity have a high glycemic index and are easier to digest. Foods with low glycemic index tend to be harder to digest and include peanuts, grapefruit, and cauliflower. This diet is also easier to implement given that there are no requirements for calorie counting and fluid restriction, fasting, or need for weighing foods.2 Most of the efficacy studies were performed in the pediatric population and it was found that 66 percent of children had greater than 50 percent seizure reduction at 12 months, but no one became seizure free.8 The side effect profile is similar to that listed for the MAD.2,8

Dietary therapies remain valuable tools in the neurologist’s arsenal for the treatment of epilepsy.5 Additionally, there are currently new indications under evaluation for treatment with dietary therapy including treatment of refractory status epilepticus, adjunct treatment in other neurological illnesses such as brain tumors, autism, migraine, and ALS.5,6 Further research is required to better understand the role of these diets in other neurological conditions.

Overall, these treatments can play a significant role in the management of epilepsy in appropriately selected and motivated patients. Appropriate monitoring by a neurologist and a nutritionist is important in achieving success as well as preventing and monitoring side effects and treating any problems that may arise. This includes initial evaluation with nutritional assessment and assessing comorbidities and potential contraindications. Bloodwork should include complete metabolic panel, complete blood count with differential, fasting lipid panel, urine calcium and creatinine levels, and urine HCG when appropriate. Follow-ups are recommended at three and six months, including repeating some of the basic blood work and monitoring for kidney stones. Other long-term monitoring may include bone density scan, annual serum zinc and selenium levels, and renal ultrasound. Other studies may be required based on the needs of the specific patient. Dietary therapy for epilepsy is being requested by patients and should be considered more frequently for both adults and patients; it is very important that both adult and child neurologists become familiar with the different dietary therapies available, the contraindications for dietary therapy, as well as how to initiate and monitor dietary therapy or refer to appropriate centers.2,4 n Visit www.practicalneurology.com to watch the videos.