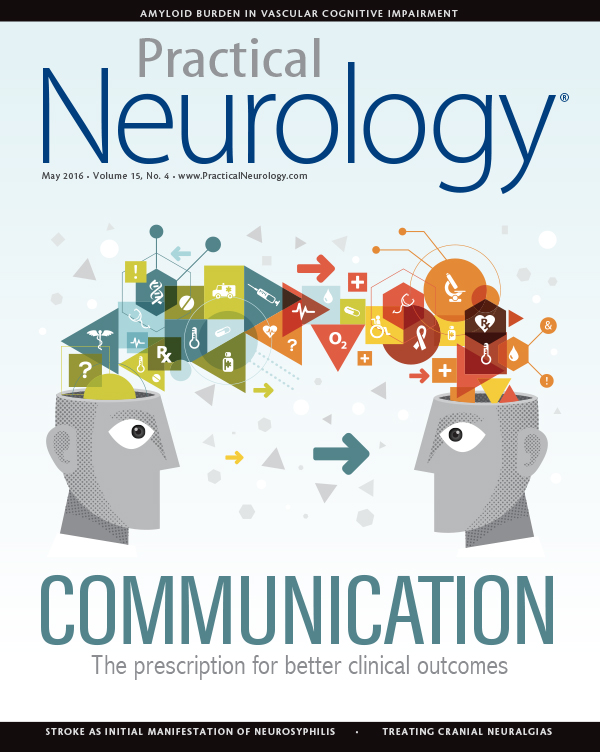 Last month, thousands of members of the international neurology community convened in Vancouver for the Annual Meeting of the American Academy of Neurology (AAN). Practical Neurology® magazine covered the meeting through many channels, such as live Twitter updates from the lecture hall, breaking news from the meeting posted on NeurologyWire.com, and video coverage featuring interviews with thought leaders (available on PracticalNeurology.com), hosted by Dr. Michelle Dougherty. Ahead are highlights from this year’s meeting:

Findings from a prospective study indicated that women with epilepsy seeking conception have comparable likelihood of achieving pregnancy, time to achieve pregnancy, and pregnancy outcomes, compared to a group of healthy peers. “There’s a lot of research showing that patients with epilepsy—men and women—do not conceive children at the same rate as those without epilepsy,” said study co-author Cynthia Harden, MD. “We were trying to prove or disprove the long-held idea that women with epilepsy have greater rates of infertility.” An app was designed for the investigators to keep track of menstral cycles, sexual activity, as well as seizure activity; participants included patients with epilepsy and healthy controls who were trying to conceive for no less than six months. “The primary outcomes showed that the fertility rates were basically the same,” she said. Studies are currently underway to examine the influence of ovulatory rates and frequency of intercourse on outcomes, as well as AED and seizure factors within the epilepsy group. But according to Dr. Harden, these initial findings should reassure women with epilepsy and clinicians when counseling these patients who are planning pregnancy.

Data for Investigational Levodopa for Subcutaneous Infusion Impresses in Presentation

NeuroDerm showcased promising new data for its investigational levodopa/carbidopa agent administered by subcutaneous infusion. The Phase 2a data, presented at the “Invited Science: Movement Disorders” session, demonstrated that NeuroDerm’s subcutaneously administered levodopa and carbidopa (LD/CD), ND0612H, led to clinically-significant plasma levodopa levels. These results suggest that ND0612H, which is intended to maintain high, consistent, and stable levodopa plasma levels in patients with severe Parkinson’s disease through simple sub-cutaneous delivery, may provide a safe and effective alternative to the current treatment options that require surgery in a majority of these patients. According to Oded Lieberman, PhD, MBA, CEO of NeuroDerm, ND0612H will fill a unique need in the market. “We are offering the same benefits of levodopa/carbidopa administered by enteral suspension without surgery,” he observed. The solution that NeuroDerm has designed and patented, according to Dr. Lieberman, “has the ability to continuously administer levodopa not through surgery but simply, subcutaneously.” According to Dr. Lieberman, this will be a particular benefit for patients with severe Parkinson’s disease for whom the therapeutic window has become so narrow. Dr. Lieberman noted that the company plans to submit NDAs for both the high-dose and low-dose versions of the drug by the end of 2017.

EMD Serono presented data showing the real-world and clinical impact of Rebif (interferon beta-1a) for people with relapsing multiple sclerosis. According to Frederick Munschauer, MD, study co-author and Vice President of Medical Affairs for Neurology and Immunology at EMD Serono, using real-world data allows physicians to gain insights into a drug’s effectiveness beyond the controlled conditions of clinical trials. “Real-world data, in which you take all patients, all comers and look how they did when exposed to a given therapy, allows us to get some insights into comparative effectiveness as well as safety, tolerability, and, importantly, the burden of care both to patients and physicians,” observed Dr. Munschauer. “You don’t know whether the result of a randomized clinical trial is indeed generalizable to a broader population of patients with disease where drug will be utilized.”

The findings showed that, after controlling for patient demographics and clinically meaningful measures of disease severity, patients initiating Rebif had a lower likelihood of experiencing surrogates for relapse in the first year than patients initiating dimethyl fumarate or teriflunomide. “This gives the practicing neurologists insights into how drugs that have been around for some time would compare to some of the newer drugs, and that’s where we think the power of this methodology will advance the clinical practice of neurology over subsequent decades,” Dr. Munschauer explained.

Acorda presented poster data from its Phase 2b study of CVT-301, a novel, self-administered inhaled levodopa therapy currently in Phase 3 development for the treatment of “off periods” in Parkinson’s disease. Inhaled CVT-301 bypasses the digestive system, reaching the brain quicker than oral medications, so off periods may be treated more quickly.

In the study, CVT-301 demonstrated rapidly improved motor function during during off-periods, according to investigator Peter LeWitt, MD, Director of the PD and Movement Disorders Program at Henry Ford Hospital in Detroit. “The novelty here is that you have a rapid onset of effect for what is essentially a rescue therapy during ‘gaps’ throughout the day in which patients experience a loss of treatment effect,” said Dr. LeWitt. “The goal is not to produce a constant effect, but to get someone out of an ‘off’ state.” Dr. LeWitt believes that CVT-301 may fill a very important need for patients and help relieve any stress or worry about leaving the house and having an attack. “What this agent can be for patients is a confidence builder,” he noted.

Acorda is currently enrolling for its Phase 3 trial and is planning to file an NDA with the FDA in early 2017.

According to Christopher Hotermans, MD, PhD, Vice President of Global Medical Therapeutic Areas for Biogen, these results are significant, given the impact of MS on cognition. “We know that roughly 52 to 70 percent of patients with relapsing MS have cognitive issues and that these can present very early on,” said Dr. Hotermans. “These data show that patients on Zinbryta have significant improvement over the active comparator over 96 and 144 weeks,” observed Dr. Hotermans. “To the best of my knowledge, that’s first time a drug is showing significant effect on cognition.”

Researchers successfully predicted the efficacy of conversion to eslicarbazepine acetate (ESL, Aptiom) monotherapy at 800mg QD for partial-onset seizures through the use of modeling and simulation of the exposure-response relationship, according to a poster study sponsored by Sunovion. The results indicated that ESL 800mg QD reduces seizure-related exits compared with the historical control in patients who convert from either one or two previous AEDs. “In this study, we identified a number of factors that affect the success of monotherapy conversion,” said study co-author and Executive Medical Director of Sunovion Dr. David Blum. “We found that patients who convert from one drug are likely to achieve success at 800mg on Aptiom.”

Regarding the use of pharmacokinetic-pharmacodynamic modeling to predict efficacy outcomes, Dr. Blum noted that simulations may help researchers extrapolate findings beyond the scope of traditional trials. “When you run a clinical trial, you answer very closely defined questions within specific contexts.” With this modeling, he says, “We can expand that context and ask different questions.” n

A review of treatment and coding options for various cranial neuralgias.

By Martin T. Taylor, DO, PhD

Stroke as Initial Manifestation of Neurosyphilis in an HIV Positive Patient

With neurosyphilis on the rise, young patients who present with ischemic strokes should be tested for HIV and syphilis.

Clarifying the Role of Amyloid Burden in Vascular Cognitive Impairment

New evidence suggests that amyloid burden plays a role in the progression of vascular cognitive impairment, particularly in older patients.