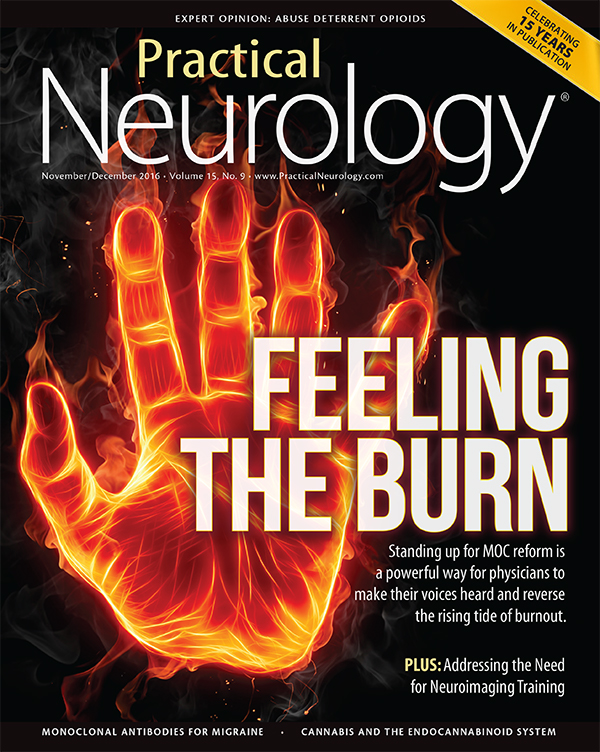 Treating the Cause, Not the Symptoms

Physician burnout is an extremely popular topic throughout all of medicine. In the simplest terms, burnout is the result of produced effort exceeding expected compensation. So how do we quantify effort and compensation? Effort encompasses the number of patients seen, procedures performed, hours worked, days on call, phone calls returned, electronic messages returned, prescriptions refilled, prior authorizations completed, and peer-to-peer calls logged. Beyond these duties, teaching and research also figure into our effort. As for compensation, in addition to monetary compensation, we must consider protected time, vacation time, promotion, and other markers of recognition/achievement.

One major component of this equation that is somewhat more difficult to quantify is the enjoyment that may or may not be ascertained from effort. For example, a physician may love to see patients, but that enjoyment may be negated by any number of factors, such as days in which the schedule is double or triple booked, or if the electronic medical record system was updated requiring additional steps for each encounter, or the medical assistant called out sick requiring the physician to input all triage data. In addition, when higher levels of effort cause physical exhaustion, stress, reduced sleep hours, missed meals, and missed social/family events, the effort/compensation ratio tends to further skew in the wrong direction.

In trying to address physician burnout, I have read articles and even CME brochures that cover coping strategies, including focusing on compassion, meditation, yoga, and anger/anxiety management. Although these are all reasonable strategies, they are all meant to modify the enjoyment associated with effort rather than directly modifying effort required or compensation. In an ideal situation, burnout could be addressed by increasing compensation to match perceived effort at a reasonable rate. However, this is not a feasible solution in a medical marketplace that is increasingly economically driven and constantly facing a deficit, according to our administrators.

A better strategy to reduce physician burnout would be to focus on removing effort-consuming tasks, which do not contribute to revenue generation, quality of practice, or patient satisfaction.

Among the many factors contributing to burnout, maintenance of certification (MOC) programs of the American Board of Medical Specialties (ABMS) and its member boards (including the American Board of Psychiatry & Neurology (ABPN)) are time consuming, expensive, and unproven in terms of improving practice. In a national cross-specialty survey study involving a random sample of 988 licensed US physicians, dissatisfaction with current MOC programs was found to be pervasive and not localized to specific sectors or specialties.1

To date, the only significant evidence supporting board certification is in regards to initial certification. Literature regarding the evidence supporting re-certification with MOC programs is weak at best, and most is written by conflicted authors who are executive board members of ABMS boards.2 In some cases, the ABMS has actually paid to have this literature published as supplements, which suggests that it may not have been published purely based on merit as author supplied funding was required.3

The Formation of the National Board of Physicians and Surgeons (NBPAS)

This dissatisfaction with MOC programs ultimately lead to physicians and specialty societies including the American Academy of Neurology petitioning the ABMS/ABPN that MOC requirements be modified in order to be less burdensome for active diplomates. When the ABMS and member boards actively deferred making any changes to the onerous MOC programs, an alternative board, the National Board of Physicians and Surgeons (NBPAS), was formed.*

The National Board of Physicians and Surgeons (NBPAS), which was started by Dr. Paul Teirstein, offers recertification in specialties offered by ABMS member boards based on the following requirements:

1. Previous certification by an ABMS member Board

3. At least 50 hours of ACCME accredited CME within the past 24 months (physicians-in-training are exempt)

5. Clinical privileges in certified specialty have not been permanently revoked

6. Cost: $169 for a two-year certification, not including the cost of obtaining CME credits

The Board of Directors of the NBPAS is comprised of members representing many of the country’s top clinics, academic institutions, and specialty organizations. As the number of NBPAS diplomates and accepting hospitals has grown, so has pressure on the ABMS to make changes.

Some of the ABMS boards, like the American Board of Anesthesiology, have since decided to discontinue a 10-year high stakes re-certification exam, and instead start a program involving 30-question online quizzes administered every quarter (120 questions per year). Although this is a step in the right direction, one must assume that making a 120 question, online, open-book exam for all diplomates re-certifying must be significantly cheaper to produce and administer than a secured 10-year exam. That being said, the cost of this new MOC program is $210 per year, rather than the a lump sum of $2,100 to take the closed book exam every 10 years.4,5 Clearly, the boards feel a reduction in cost of production to the boards should not translate to a reduction in cost to the diplomates, and that the boards should actually generate even greater revenues.6

What Do Private Payers Gain From Requiring MOC?

As a volunteer board member of NBPAS (no compensation or honorarium as opposed to the salaries of ABMS board members, which can range from $300,000 to greater than $800,000), I have often wondered why private payers require MOC when Medicare does not require board certification or MOC. The answer is quite disturbing. Private payers actually participate in certification, which is issued by the National Committee of Quality Assurance (NCQA). Margaret E. O’Kane is the founder and president of the NCQA, and she is also a member of the ABMS Board of Directors.9,10 The NCQA requires private payers to require physicians to participate in MOC in order to be NCQA certified. Thus, anyone contracting with a private payer will require MOC. In the conflicted case of Ms. O’Kane, she profits from the NCQA requiring private payers to require physicians to participate in MOC, and then she profits again from her ABMS position when said physicians must pay to comply with MOC requirements.

Although the burden of MOC is significant and that the battle for reform remains an uphill one for physicians, several signs of progress have emerged that would indicate that the tide may be changing. For example, on April 12, 2016, the Oklahoma state legislature passed a law, which makes it unlawful to discriminate against a physician based on board recertification.11 Having passed this law, Oklahoma is regarded as the first “right to care” state in the US. Similar bills are floating/will be floating in the state legislatures of California, Florida, Michigan, and Texas.

Another big swing in the favour of MOC reform is the recent action of the American Medical Association (AMA). On September 30, 2016, the AMA issued the following statement “RESOLVED, That our American Medical Association, through legislative, regulatory, and collaborative efforts, advocate that Maintenance of Certification not be a requirement for: (1) medical staff membership, privileging, or credentialing; (2) insurance panel participation; or (3) state medical licensure. (Directive to Take Action).”12

Despite this progress, much work remains towards the eventual goal of ending the burdensome requirements of MOC. To date, I have presented the case for MOC reform to the California, Massachusetts, New York, and Pennsylvania State Neurological Societies. The California, Hawaii, Massachusetts, Pennsylvania, Texas, Wyoming, and Washington State Neurological Societies have issued formal statements in support of MOC reform with some formally endorsing NBPAS as a viable alternative for board recertification. Ultimately, it will take the ongoing actions of like-minded physicians, and our ability to appeal to our leaders to bring meaningful change.

Although not a cure for physician burnout, MOC reform is certainly a step in the right direction in terms of ending the expensive, time-consuming, and unproven programs that are contributing to this epidemic. n

Paul G. Mathew, MD, FAAN, FAHS is Co-Chief Medical Editor of Practical Neurology® and a member of the Harvard Medical School Faculty. He is Director of Continuing Medical Education at the Brigham & Women’s Hospital, John R. Graham Headache Center, and is a staff neurologist at Harvard Vanguard Medical Associates and the Cambridge Health Alliance. He also serves as the neurology representative on the volunteer advisory board of the National Board of Physicians and Surgeons.

* For more information about the NBPAS, read Dr. Mathew’s article from the January/February 2016 edition, entitled “An Alternative Pathway to ABPN Maintenance of Certification, available on practicalneurology.com.

Cannabis-derived therapies may offer a great opportunity to modulate the endocannabinoid system, but understanding the risks is paramount.

The recent development of monoclonal antibodies for the treatment of migraine may have a significant impact on the field and mark a new chapter in patient care.

By Clinton G. Lauritsen, DO and Stephen D. Silberstein, MD

The Role of Abuse Deterrent Formulations of Opioids in Pain Management

An emerging class of potentially safer opioid medications will offer new challenges and opportunities for both patients and physicians.

Treating the Cause, Not the Symptoms

An integral part of clinical neurology and neurosciences, neuroimaging training must be better harnessed and incorporated into the educational spectrum of the specialty.