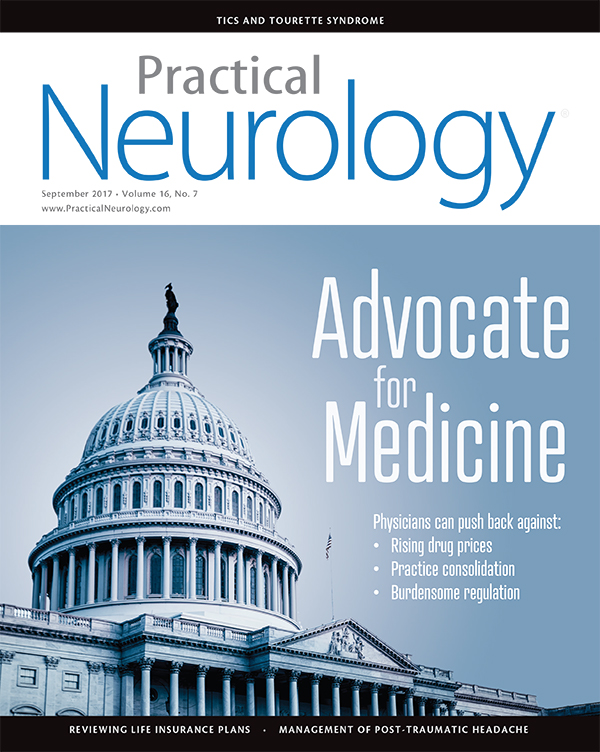 Recognizing the full spectrum of phenomenology of tics and various behavioral comorbidities is critical to diagnosis.

Tourette syndrome (TS) is a childhood onset neurological disorder characterized by multiple motor and phonic tics and a wide range of behavioral problems, including attention-deficit with hyperactivity disorder (ADHD) and obsessive-compulsive disorder (OCD).1 The Diagnostic and Statistical Manual of Mental Disorders, Fifth Edition (DSM-5) defines TS by the presence of multiple motor and phonic tics with onset prior to age 18 and lasting at least one year. Epidemiological studies have shown that 20 to 30 percent of children exhibit tics sometime during their childhood, and two to three percent of children develop TS. Symptoms are typically at their worst just prior to puberty and spontaneously improve by the age of 20 years, but in approximately one-third of patients symptoms persist through adulthood.

There is no diagnostic test for TS and, therefore, recognition of the full spectrum of phenomenology of tics and various behavioral comorbidities is critical to diagnosis. Tics, the clinical hallmark of TS, are relatively brief and intermittent movements (motor tics) or sounds (vocal or phonic tics). This division into motor and vocal/phonic tics, however, is artificial, because vocal/phonic tics are actually motor tics that involve respiratory, laryngeal, pharyngeal, oral, and nasal musculature.

Motor tics typically consist of sudden, abrupt, transient, often repetitive, and coordinated (stereotypical) movements that may resemble gestures and mimic fragments of normal behavior, vary in intensity, and are repeated at irregular intervals. They may occur as brief bouts or bursts and they tend to wax and wane with unpredictable periodicity. In addition to variable frequency and intensity, tics often change anatomic location.

Typically, tics can be volitionally suppressed, although this might require intense mental effort. They may also increase when suppression is no longer needed, such as when returning home from school. In contrast to other hyperkinetic movement disorders that are usually suppressed during sleep, motor and phonic tics tend to persist during all stages of sleep.

Tics may be simple or complex. Simple motor tics involve only one group of muscles, causing a brief, jerk-like movement. They are usually rapid and brief (clonic tics), but they may also be slower, causing a briefly sustained abnormal posture (dystonic tics) or an isometric contraction (tonic tics). Examples of simple clonic motor tics include blinking, nose twitching, and head jerking. Motor and phonic tics are preceded by premonitory sensations in more than 80 percent of patients. This premonitory phenomenon consists of sensations or discomforts localized to the anatomic region of the tic. These include a burning feeling in the eye before an eye blink, tension or a crick in the neck that is relieved by stretching the neck or jerking the head, a feeling of tightness or constriction that is relieved by arm or leg extension, nasal stuffiness before a sniff, a dry or sore throat before throat clearing or grunting, and itching before a rotatory movement of the scapula. Besides these local or regional sensations, premonitory phenomenon may be a more generalized, poorly described feeling, such as an urge, anxiety, anger, and other psychic sensations. The pathophysiology of premonitory sensations is not well understood, but they represent an example of increasingly recognized sensory aspects of movement disorders.2

ARTICLE AT A GLANCE

Recognition of the full spectrum of phenomenology of tics and various behavioral comorbidities is critical to diagnosis of Tourette syndrome. While behavioral therapy is the most common form of intervention, several pharmaceutical agents are currently under investigation to treat tics and Tourette syndrome.

Simple dystonic tics include blepharospasm, oculogyric movements, bruxism, sustained mouth opening, torticollis, and shoulder rotation. Tensing of chest, abdominal, or limb muscles is an example of a tonic tic. Blocking tics are due to either prolonged tonic or dystonic tics that interrupt ongoing motor activity such as speech (intrusions) or a sudden inhibition of ongoing motor activity (negative tic). Complex motor tics consist of coordinated, sequenced movements resembling normal motor acts or gestures that are inappropriately intense and timed. Additional examples of complex motor tics include gesturing “the finger” and grabbing or exposing one’s genitalia (copropraxia) or imitating gestures (echopraxia). Some complex motor tics may be difficult to differentiate from compulsions, which frequently accompany tics, particularly in patients with TS. Simple phonic tics typically consist of sniffing, throat clearing, grunting, squeaking, screaming, coughing, blowing, and sucking sounds. Complex phonic tics include linguistically meaningful utterances and verbalizations, such as shouting obscenities or profanities (coprolalia), repetition of someone else’s words or phrases (echolalia), and repetition of one’s own utterances, particularly the last syllable, word, or phrase in a sentence (palilalia).

Several different scales are used to assess various aspects of TS. The most widely used instrument to “measure” tics is the Yale Global Tic Severity Scale, which consists of two broad domains: Total Tic Severity (with two sub-domains: Motor and Phonic Tics) and Impairment. Within each category there are five dimensions, scored from 0 to 5: number of tics, frequency, intensity, complexity, and interference. The total tic score ranges from 0 to 50; the usual range in most studies is 15 to 30. A health-related quality of life (HR-QOL) has been developed and validated for internal consistency, test-retest reliability, and against other clinical scales.

Pathogenesis of TS is still not well understood, but various clinical, genetic, physiological, and imaging studies suggest that TS represents a developmental genetic disorder resulting in abnormal function in the corticostriatal-thalamic-cortical circuit, which then leads to motor and behavioral disinhibition.3

Despite numerous attempts, the gene or genes responsible for TS have not yet been identified. One of the reasons for this is that, as we demonstrated several years ago, TS has bilineal transmission, meaning that both parents are usually affected to some degree.

Interventions for Tics and TS

Many patients with TS do not require any form of therapy beyond education and counseling about the disease. Although behavioral therapy, such as Comprehensive Behavioral Intervention for Tic Disorders and habit reversal therapy, is increasingly advocated in the treatment of TS, there is a marked paucity of well-trained therapists who are certified in these behavioral techniques. Thus, behavioral therapy is often difficult to access, maintain, and afford.

By the time children or adults with TS are referred to our Movement Disorders Clinic, their symptoms are usually quite troublesome, requiring some form of pharmacological intervention.4 If the patient has only focal tics, such as frequent and persistent blinking that may lead to sustained eye closure (blepharospasm), forceful neck movements (“whiplash tics”), or loud vocalizations including shouting of obscenities, an injection of botulinum toxin into the affected muscles may be the best therapeutic option, providing effective relief of the tics for at least three to four months. Botulinum toxin not only improves the motor component of the tic but also the premonitory urge.

Numerous controlled and open-label trials have found that dopamine receptor-blocking drugs (neuroleptics) and dopamine-depleting drugs (e.g., tetrabenazine) are clearly most effective among pharmacologic agents used for tic suppression.1,5 Currently, pimozide, haloperidol, and aripiprazole are the only drugs approved by the FDA for the treatment of TS, but we almost never use these drugs in our Movement Disorders Clinic due to a variety of potential side effects, including tardive dyskinesia. Until recently we have used fluphenazine as the first-line anti-tic pharmacotherapy, because it is quite effective in controlling tics and appears to have a relatively low risk of side effects.6 Since I first obtained my Notice of Claimed Investigational Exemption for a New Drug for tetrabenazine in 1979, I have used this drug in thousands of patients with various hyperkinetic movement disorders, including TS. Tetrabenazine (Xenazine, Lundbeck) was approved by the FDA in 2008 for the treatment of chorea associated with Huntington’s disease, but it is also a powerful anti-tic drug that has the advantage over typical and atypical neuroleptics in that it does not cause tardive dyskinesia.7 As a vesicular monoamine transporter type 2 (VMAT2) inhibitor, tetrabenazine depletes dopamine presynaptically. Although generally effective in reducing abnormal involuntary movements including tics, tetrabenazine is associated with some adverse effects, such as somnolence, nausea, depression, insomnia, akathisia, and Parkinsonism, that may limit its utility. Furthermore, the active metabolites of tetrabenazine, alpha-dihydrotetrabenazine, and beta dihydrotetrabenazine, have short half-lives, thus requiring tetrabenazine to be administered at least three times per day. To address some of the limitations of tetrabenazine, Auspex (a wholly owned subsidiary of Teva Pharmaceutical Industries) has developed a deuterated form of tetrabenazine known as deutetrabenazine (previously referred to as SD-809 or TEV-50717). The deuterium placement forms a stronger bond with carbon that requires more energy for cleavage, thus attenuating metabolism, resulting in longer half-lives and other potential advantages. In a pilot study involving 23 patients with moderately severe TS, we showed that deutetrabenazine was associated with a 37.6 percent reduction in tic severity; other measures also showed improvement without significant adverse effects.8 Another vesicular monoamine transporter type 2 inhibitor, valbenazine (NBI-98854, Neurocrine Biosciences), administered only once a day is also being investigated in tardive dyskinesia and in TS. A novel D1 dopamine receptor antagonist, ecopipam (Psyadon Pharmaceuticals), has been reported to be effective in the treatment of TS-related tics in an open-label trial and is currently being investigated in children with TS. All three drugs—deutetrabenazine, valbenazine, and ecopipam—are currently being investigated in the treatment of TS by the movement disorders team at Baylor College of Medicine. Finally, if medications and botulinum toxin fail to obtain satisfactory relief of symptoms, deep brain stimulation targeting the thalamus, globus pallidus, or other brain regions may need to be considered.9

In 2015, the Parkinson’s Disease Center and Movement Disorders Clinic (PDCMDC) was designated by the Tourette Association of America (TAA) as its first Center of Excellence. We are honored by this prestigious designation which is an affirmation of our commitment to excellence in clinical care, research, and education related to TS. In addition to the multidisciplinary care (which includes behavioral, medical, and surgical therapies), the PDCMDC is currently conducting dozens of clinical trials in various movement disorders, including four investigational novel treatments in TS. For further information about the TAA Center of Excellen and the PDCMDC’s experimental therapeutics research program, training, and other clinical and educational activities, visit Jankovic.org. Neuroimaging: Bolstering the Role of Neurologists

Despite limited options for the treatment of post-traumatic headache, some evidence suggests potential for select therapies.

Recognizing the full spectrum of phenomenology of tics and various behavioral comorbidities is critical to diagnosis.

Rising Drug Prices and the Cost of Care: What Can Physicians Do?

The multiple sclerosis drug market offers a snapshot of a growing problem. Physicians should speak out on behalf of the specialty and their patients.

Advocating for patients and the specialty is a powerful way for physicians to make their voices heard.