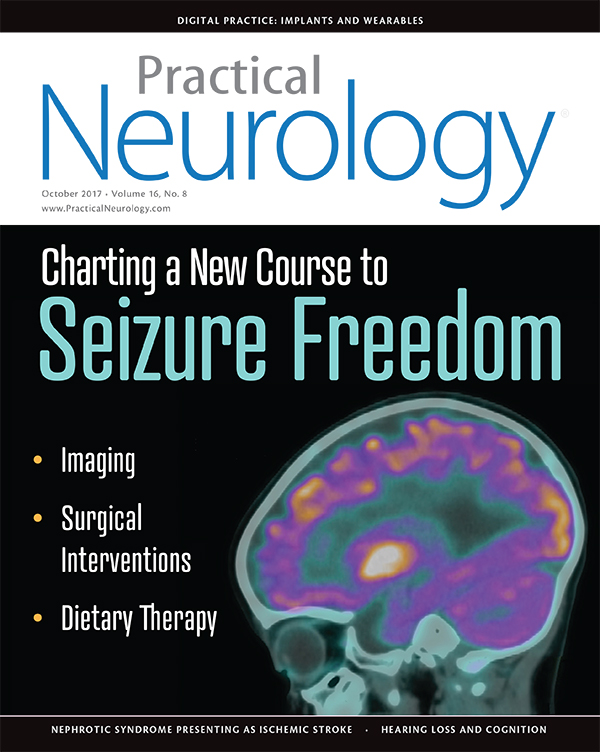 Managing Epilepsy in Pregnancy and Postpartum
“What’s important now is that we think about how we’re going to manage those medications that we’ve identified as safe during pregnancy, so that we can maintain seizure control in women. That takes a lot of adjusting of medications during pregnancy to maintain their target concentration.”

Visit PracticalNeurology.com to watch Page B. Pennell, MD offer tips on delivering the safest and most effective care. She also gives a snapshot of the evolving research spectrum of epilepsy and pregnancy.

The therapeutic armamentarium for partial-onset seizures was given a boost with the supplemental approval of two drugs: Briviact (briveracetam, UCB) CV as a monotherapy in patients 16 years of age and older and Aptiom (eslicarbazepine acetate, Sunovion) in children and adolescents between four and 17 years of age.

Briviact is the newest antiepileptic drug in the racetam class of medicines and demonstrates a high and selective affinity for synaptic vesicle protein 2A in the brain. Gradual dose escalation is not required when initiating treatment with Briviact for monotherapy or adjunctive therapy, allowing clinicians to initiate treatment at a therapeutic dose. UCB submitted a supplemental application for a Briviact monotherapy indication taking into account a recent General Advice Letter, issued by the FDA, which stated it is acceptable to extrapolate the safety and efficacy of drugs approved as adjunctive therapy for the treatment of partial-onset seizures to their use as monotherapy.

The approval of Aptiom in patients between the ages of four and 17 was based on FDA guidance that permits the extrapolation of data to support pediatric use. The safety and efficacy of Aptiom as monotherapy and adjunctive therapy for the treatment of partial-onset seizures in adults was established in five multicenter, randomized, controlled clinical trials. Pharmacokinetic analyses of adult and pediatric data supported the proposed dosing regimen in the pediatric population.

Phase 3 findings suggest that the investigational ZX008 (low-dose fenfluramine hydrochloride, Zogenix) is effective for the treatment of Dravet syndrome. The study enrolled 119 patients (median age, eight years old) across sites in the US, Canada, Europe, and Australia. Following a six-week baseline observation period, patients were randomized to one of three treatment groups: ZX008 0.8mg/kg/day (30mg maximum daily dose), ZX008 0.2mg/kg/day, and placebo; ZX008 or placebo was added to current regimens of antiepileptic drugs. Patients were titrated to their target dose over two weeks and then remained at that fixed dose for 12 weeks. The mean baseline convulsive seizure frequency across the study groups was approximately 40 seizures per month. Patients taking ZX008 0.8mg/kg/day achieved a 63.9% reduction in mean monthly convulsive seizures compared to placebo. The median percent reduction in monthly convulsive seizure frequency was 72.4% among patients taking ZX008 0.8mg/kg/day patients, compared to 17.4% in patients taking placebo.

ZX008 is designated as an orphan drug in both the US and Europe and has received Fast Track designation in the US. Zogenix is aiming to submit applications for regulatory approvals in the US and Europe in the second half of 2018. “While there are still significant knowledge gaps surrounding SUDEP, most patients and families would like to know about the risk of SUDEP even if it is low, particularly if there are steps that can be taken to further minimize that risk. Clinicians should provide patients and families with information in clear, simplified terms in both a positive (e.g., risk of SUDEP) and negative (e.g., risk of not being affected by SUDEP) manner, so that patients will appropriately understand their risk.”

Algorithm May Predict Response to VNS in Children With Intractable Epilepsy

New findings suggest that activity within the thalamocortical circuitry may predict response to vagal nerve stimulation (VNS Therapy, LivaNova) in children with medically intractable epilepsy (Neuroimage Clin; 16:634-642). Investigators evaluated 21 children with medically intractable epilepsy who underwent resting-state functional MRI prior to implantation of VNS. They then performed whole-brain connectivity to thalamic regions of interest and used multivariate generalized linear models to correlate resting-state data with seizure outcomes, while adjusting for age and sedation status. They used a supervised support vector machine algorithm to classify response to chronic VNS based on intrinsic connectivity.

According to the results, 11 patients (52%) had 50% or greater improvement in seizure control after VNS. Moreover, enhanced connectivity of the thalami to the anterior cingulate cortex and left insula was associated with greater VNS efficacy. In fact, a support vector machine correctly classified response to chronic VNS with 86% accuracy.

These results were supported by findings from an external cohort of eight children, in which the predictive model correctly classified the seizure response with 88% accuracy. According to the authors, the findings encourage the study of intrinsic connectivity to inform neural network-based, personalized treatment decisions for children with intractable epilepsy.

A new study suggests that life expectancies vary depending on the type of epilepsy (Epilepsia, E-pub Sep 28). To assess potential years lost and change in life expectancy in newly diagnosed epilepsy over a period of 40 years, researchers analyzed life expectancy in a cohort of adult patients diagnosed with epilepsy between 1970 and 2010. They compared results to the general population. They estimated life expectancy by a Weibull regression model using gender, age at diagnosis, epilepsy etiology, and year of diagnosis as covariates at time of epilepsy diagnosis, and five, 10, 15, and 20 years after diagnosis. They found a substantial decrease in life expectancy in certain subgroups, strongly depending on epilepsy etiology and time of diagnosis. Specifically, time of life lost was highest in patients with symptomatic epilepsy diagnosed between 1970 and 1980. The impact declined with increasing time from diagnosis. Importantly, they observed an opposite trend in later decades, with life expectancy prolonged in some subgroups, particularly in those with newly diagnosed idiopathic and cryptogenic epilepsy between 2001 and 2010.

Despite current logistical and clinical challenges, dietary therapy will play a significant role in epilepsy treatment for years to come.