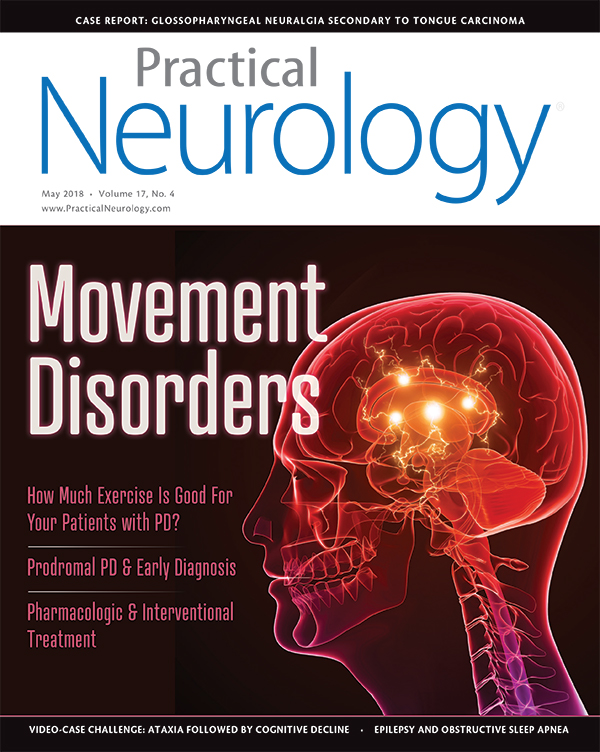 There are many examples of the significant relationship between sleep and epilepsy. Commonly encountered examples include seizures provoked by sleep deprivation, the tendency for frontal lobe seizures to occur out of sleep, and specific disorders such as benign rolandic epilepsy. Obstructive sleep apnea (OSA) often co-occurs in patients with epilepsy, and the effects of both conditions can affect each other in a bidirectional manner.

OSA is defined by repetitive collapses of the upper airway (apneas and hypopneas) that cause arousals, sleep fragmentation, and oxygen desaturations.1 Intermittent hypoxia increases sympathetic tone, endothelial dysfunction, and inflammation. Arousals and sleep instability induce sympathetic activity and reversal of the normal drop in blood pressure during sleep. Sleep fragmentation induces metabolic dysregulation with alterations in glucose metabolism and orexin and gherlin levels.

The prevalence of OSA is often reported as approximately 10% for women and 25% for men.2-4 However, the estimated prevalence of OSA is highly variable depending on the population studied and the definitions and diagnostic criteria used.5 When the American Academy of Sleep Medicine recommended apnea-hypoxia index (AHI) (Table), defined by hypopneas with ≥3% oxygen desaturations or arousals (AHI3A)6,7 is used, the prevalence of OSA may actually be as high as 24.8% to 83.8% in men, with 49.7% of men having moderate to severe OSA, and 9.6% to 60.8% in women, with 23.4% having moderate to severe OSA. In persons with epilepsy, the prevalence of OSA (AHI3A > 10) is estimated to be approximately 30% in a population unselected for sleep complaints.2-4 In patients with epilepsy, risk factors for comorbid OSA include male sex, being overweight or obese, and having late onset, refractory, or worsening epilepsy.6 Patients with craniofacial abnormalities or syndromic facial features are at higher risk as well. Decreased seizure control is one of the primary concerns of unrecognized and untreated OSA in persons with epilepsy; however, these patients may also have decreased quality of life, reduced cognitive functioning, sleepiness, cognitive impairment, and cardiovascular morbidity and mortality.1,7

There is evidence for a bidirectional relationship between OSA and epilepsy. The proposed mechanisms of the deleterious effect of OSA on epilepsy include sleep deprivation, sleep fragmentation, cerebral hypoxemia, decreased cardiac output, cardiac arrhythmias, autonomic instability, and increases in sympathetic activity.7 Evidence from prior studies has demonstrated abnormal sleep architecture in people with epilepsy. These abnormalities include reduced total sleep time, reduced REM sleep, prolonged REM latency, and increased number of arousals; these abnormalities are independent of seizures.6 The occurrence of seizures can further exacerbate abnormal sleep architecture.6 Epilepsy may also have a more direct effect on OSA in some patients as supported by a case report demonstrating the resolution of clinically significant OSA after frontal lobe resection.7,8 There is also evidence that adults with temporal lobe epilepsy are more affected by abnormal sleep architecture compared to patients with frontal lobe epilepsy or generalized epilepsy.6

This effect of epilepsy on sleep architecture is potentially exacerbated by selection of antiepileptic drugs or neuromodulation therapy. Treating patients with epilepsy with sedating medications such as benzodiazepines can reduce their upper airway muscle tone; other medications such as valproic acid cause weight gain that may worsen OSA.1 Special consideration is needed for patients treated with vagal nerve stimulators (VNS). VNS is known to cause obstructive or central apneas resulting in intermittent hypoxia and hypocapnia. Rapid cycling of VNS may increase the number of respiratory effort-related arousals per hour of sleep. Programming the VNS to decrease signal frequency may be needed to minimize the occurrence of respiratory disturbances in sleep.6,7

There are few studies examining the effect of continuous positive airway pressure (CPAP) treatment on epilepsy. A small study of 9 adults with refractory epilepsy evaluated interictal discharges (IEDs) and found that more severe OSA correlated with higher spike rates, and treatment of OSA resulted in decreased IEDs during waking and during non-REM sleep, improved sleep architecture, and decreased seizures.3,7 Another study of 6 patients with refractory epilepsy found that all had improved seizure frequency (1.31 ±0.39 reduced to 0.15 ±0.15 seizures per month, P = .02) after becoming adherent to therapy with CPAP.9 In a study of 132 patients, 76 (57%) had OSA, 43 (56.6%) of those with OSA were on positive airway pressure (PAP) therapy, and 83.7% of those patients were adherent for ≥4 hours on at least 5 nights per week. In 84% of the PAP-treated patients with OSA, there was ≥50% seizure reduction or freedom from seizures compared to a 54% seizure reduction in the non-OSA group and 39.4% of the untreated OSA group. Overall, 35% of patients with PAP-treated OSA became seizure free compared to 10% of patients with untreated OSA.3 Although these studies are suggestive, the small sizes and nonrandomized, retrospective nature of the studies make it possible that the same factors that make a patient more likely to be adherent with CPAP also decrease the likelihood of recurrent seizure.

Currently, screening for OSA and other sleep disorders in general neurology and epilepsy clinics is often suboptimal. The Epworth Sleepiness Scale that has traditionally been used as a screening tool is less effective in screening in patients with epilepsy.2 A quality improvement project that evaluated screening for sleep habits in patients with epilepsy reported baseline screening was approximately 3.3%.1 Following their intervention using their STOP BANG tool, which measures snoring, tiredness during daytime, observed apnea, high blood pressure, body mass index >30, age, neck circumference ≥17 inches in men and ≥16 inches in women, and gender, 41.6% of patients with epilepsy were screened for sleep disorders. Of those screened, 31.2% met criteria for increased risk of OSA.1 This suggests that STOP BANG may be an effective tool for screening for sleep problems in patients with epilepsy, but more research is needed. Taking a detailed sleep history that includes other common symptoms of OSA including multiple awakenings at night, nocturia, gasping or choking, witnessed apneas, unrefreshing sleep, physical signs, hypertension, craniofacial abnormalities, macroglossia, retrognathia, micrognathia, narrow upper airway, tonsillar hypertrophy, and long or edematous uvula may also be helpful in screening for an increased risk of OSA.

It is necessary to consider the possibility of a comorbid sleep disorder in patients with epilepsy. Both clinicians and patients have a tendency to attribute sleepiness to antiepileptic drug effect. Although antiepileptic drugs do commonly cause sedation, other etiologies, particularly OSA along with other sleep disorders, should also be considered. Proper diagnosis and management of sleep disorders are important for seizure control as well as improvement in quality of life and prevention of further morbidity and mortality. While some studies suggest that treatment of OSA with CPAP may reduce seizure frequency in patients with epilepsy, larger randomized studies are needed. Finally, although recent investigations have shed some light on interactions between OSA and epilepsy, more research is needed to provide guidance in optimal screening, evaluation, and management.

The Role of Exercise in Treating Parkinson’s Disease

There is growing evidence that high-intensity exercise is neuroprotective.

Carcinoma of the tongue is a rare secondary cause.

Evaluation of Patients With Tremor

A careful history and directed examination are usually sufficient to diagnose and manage most patients presenting with tremor.