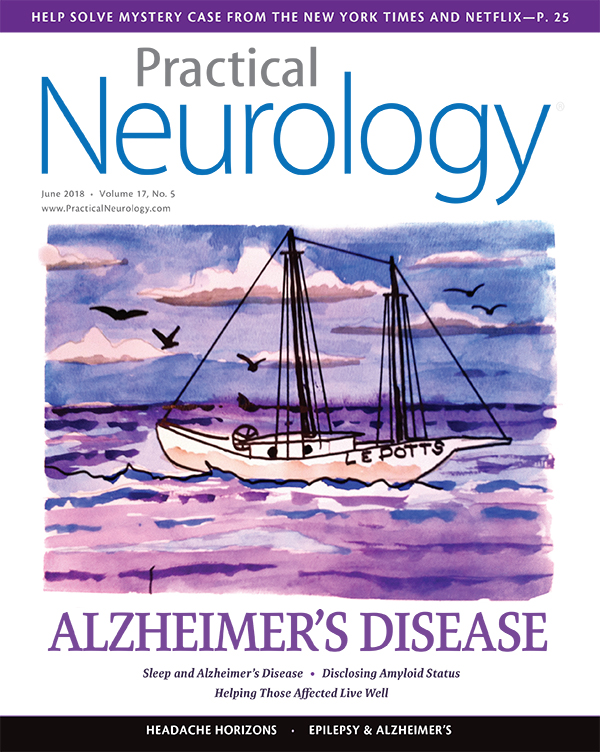 Awareness of pathognomonic findings may prevent unnecessary tests and treatments.

A white boy, age 11 years, was seen for a first occurrence of hemiparesis, ataxia, and dysarthria, which had been present for 3 days. He had a history of abdominal surgery a month earlier as treatment for a ruptured appendix. He was otherwise healthy and had no developmental delay. On admission, the patient had facial drooping, dysarthria, and ataxia. There were no signs of acute infection, signs of meningeal irritation, or vision problems. No hyporeflexia or sensory impairments were present.

Figure 1. Brain MRI at 11 years of age. Diffusion-weighted image sequence (A, C) and apparent diffusion coefficient (B, D) showing restricted diffusion in the centrum semiovale (A, B) and the splenium of the corpus callosum (C, D).

We treated the patient empirically with intravenous methylprednisone because of the brain MRI findings suggestive of demyelination. However, CSF analysis showed no evidence of demyelination (eg, presence of myelin basic protein or increased intrathecal immunoglobulins). Our patient’s symptoms resolved after 1 day of hospitalization. A brain MRI taken 5 days later showed decreases in the amount of white matter signal abnormality. A repeat brain MRI taken 6 months later was normal, with complete resolution of the previously detected signal abnormalities. Clinical findings were resolved.

At age 14, our patient presented again after 1 day with acute dizziness followed by transient slurring of speech and left facial droop. He had a history of presumed viral gastroenteritis 4 weeks earlier.

Brain MRI findings were symmetric, restricted diffusion involving the bilateral centrum semiovale and splenium of the corpus callosum, similar to imaging findings at initial presentation (Figure 2). We treated the patient with methylpredisone, and again the symptoms resolved. At a follow-up outpatient clinic visit, genetic testing was ordered (because of the reported family history of neuropathy and diminished extremity reflexes), and results showed X-linked Charcot–Marie–Tooth (CMT) disease with 2 mutations in the gene for connexin: homozygous transversion of thymine for guanine at nucleotide position 467 resulting in a leucine for arginine substitution at codon 156. Annual follow-up visits were recommended.

Figure 2. Brain MRI at 14 years of age. Diffusion-weighted image sequence (A, C) and apparent diffusion coefficient (B, D) showing restricted diffusion in the centrum semiovale (A, B) and the splenium of the corpus callosum (C, D).

At follow-up 2 years later and 5 years after his initial presentation, our patient had mild lower extremity weakness with foot drop and mild distal sensory loss.

At age 17, 6 years after the initial presentation, our patient presented with acute-onset facial weakness, right arm weakness, and dysarthria. A day earlier, he had intermittent slurring of speech, mild left facial weakness, and decreased sensation over the left side of his face. He had been apparently healthy since last 1 year ago, except for being diagnosed 3 weeks earlier with infectious mononucleosis.

He was dysarthric with decreased facial muscle movement on the left and mild wasting of the thenar muscles. There was mild weakness in his peroneal muscles, absent deep tendon reflexes in the lower extremities, and hyporeflexia in the upper extremities. He had decreased distal vibration sensation in all extremities. His gait was wide based, with noticeable foot drop, and he had difficulty with both heel and tandem walking.

Figure 3. Brain MRI at 17 years of age. Diffusion-weighted image sequence (A, C) and apparent diffusion coefficient (B, D) showing restricted diffusion in the centrum semiovale (A, B) and the cerebellar peduncles (C, D).

We treated the patient with intravenous methylprednisone and his symptoms resolved completely in 24 hours.

As noted, this patient was diagnosed with CMT1X at age 14. CMT is a broad umbrella term for a variety of hereditary neuropathies.1 Usual onset is in early childhood, but diagnosis can be delayed until early adulthood. Distal motor and sensory neuropathy characterized by slowly progressing gait disturbances, pes cavus, and depressed tendon reflexes is characteristic.2 Patients occasionally present with central nervous system involvement.3-10 When peripheral neuropathy is not yet clinically manifested, recurrent encephalopathy with focal neurological deficits can make clinical diagnosis challenging.

Electrodiagnostic studies identified the extent, type, and severity of these familial polyneuropathies, characterizing the taxonomy of CMT (ie, axonal vs demyelinating). Molecular genetic testing led to understanding both the natural history and the spectrum of CMT.

The most common form is CMT1, which is autosomal dominant and accounts for 75% to 80% of cases; X-linked CMT accounts for approximately 15% of all cases.

Testing for mutations in GJB1 detects 90% of CMT1X.

Mutations of GJB1, which encodes the protein connexin 32 (Cx32) that is expressed in Schwann cells and oligodendrocytes are the only known causes of CMT1X, a common cause of childhood-onset hereditary peripheral neuropathy.1 More than 400 mutations in GJB1 have been reported.1,2

This is a case of recurring acute encephalopathy syndrome with characteristic MRI abnormalities prior to the onset of classical manifestations and diagnosis of CMT1X.

Differential diagnosis of recurrent neurological deficits and encephalopathy includes cerebrovascular diseases (eg, strokes, vasculitis, hypertensive encephalopathy syndrome), metabolic disturbances, and inherited metabolic disorders. Most patients with CMT do not have any CNS abnormalities; clinically, CMT is a disease of the peripheral nervous system.

Silent CNS involvement with abnormal brainstem-evoked responses and pyramidal tract signs have been described in CMT. The clinical episodes in the case described were occurred a few weeks after infectious and inflammatory illnesses. Acute-onset aphasia, dysarthria, hemiparesis, facial weakness, and ataxia are common manifestations4-8 that can last 3 to 4 days before almost complete resolution. Antecedent viral infections5 and other metabolic stressors (eg, hyperventilation7 and travel to high altitude9) have been previously reported.

Transient focal deficits and encephalopathy along with abnormal imaging results are a pathognomonic clinical presentation of CMT1X.6,11 However, as in our case, these findings can predate the diagnosis of CMT1X, especially if clinical findings of peripheral neuropathy are absent or there is no positive family history available.

Brain imaging findings during these events are also of considerable diagnostic importance. Restricted white-matter diffusion over the centrum semiovale, posterior corpus callosum, and sometimes cerebellar peduncles is noted with minimal findings in T2 and FLAIR imaging.3-8 Stroke-like events with diffusion abnormalities may be confused with cerebral ischemia.1,10 However, the diffusion abnormalities spare cortical U fibers, are bilateral and symmetrical, and are not restricted to specific cerebrovascular areas. Brain MRA is normal. The findings on brain MRI are reversible, although may persist for months. The extent, appearance, or resolution of imaging findings does not correlate well with clinical symptoms.

Diffusion-weighted MRI abnormalities are bilaterally symmetrical and not restricted to vascular territories.

It is unknown whether acute treatment with steroids hastens symptom resolution. As the diffusion sequences became routine in brain MRI studies, these findings created diagnostic challenges for both neurologists and neuroradiologists.

Awareness of these unusual CNS manifestations and the imaging findings in CMT1X is important to avoid unnecessary investigations and treatment.