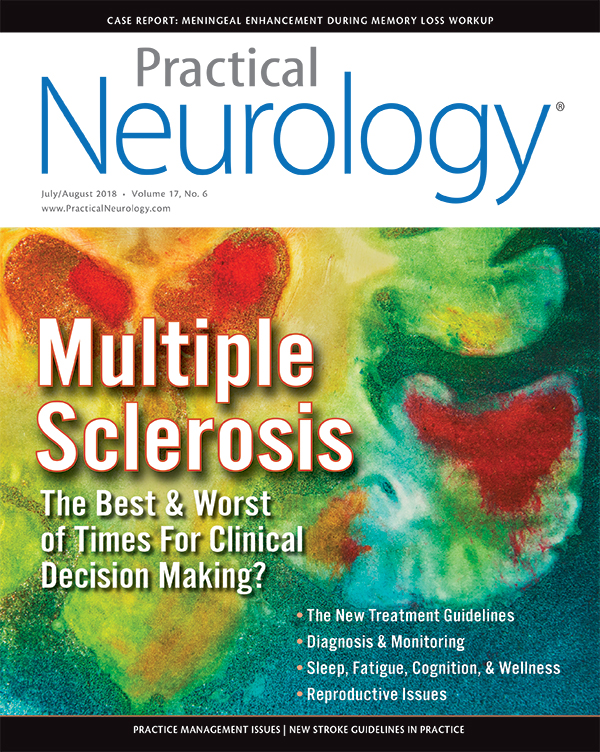 The prototypic patient with multiple sclerosis is a young woman of childbearing age, which makes reproductive issues extremely important.

Multiple sclerosis (MS) is the most common acquired neurologic disease of young adults, short of trauma. Pathologic tissue damage of MS is confined to the central nervous system (CNS): the brain, spinal cord, and optic nerves. Current numbers suggest that close to 1 million individuals are affected in the US, and several million worldwide.1

MS is characterized by a number of distinct features. It affects young people. Approximately 90% of individuals with MS present between the ages of 15 and 50 (with a peak at age 20 to 40). MS is highly variable. It is found in 0.1% to 0.3% of autopsied individuals and may be silent for the lifetime of the individual. When clinically apparent, it may be very mild, very severe, and anything in between. MS takes either a relapsing or progressive course. The relapsing phenotype is more common; it is characterized by onset of neurologic deficits over days to weeks, followed by complete or incomplete recovery, and clinical stability between attacks. The less common progressive phenotype shows gradual neurologic deterioration that is typically a worsening myelopathy. MS is a female-predominant disease. The current sex ratio is 3 to 1, and prevalence is increasing among women. A recent report from Denmark noted a marked increase in MS over the last 60 years, particularly among women over age 50.2 This older age at onset needs to be confirmed. MS shows interesting links to hormonal states, the best studied of which is pregnancy.3 Because the prototypic person with MS is a young woman of childbearing age, reproductive issues are integral to the management of patients with MS (Table 1). This review covers current opinion and consensus to guide optimized counseling. Several hundred genes, largely related to risk and susceptibility, are associated with MS, but it is not an inherited disease. There is no single gene that causes MS, and only 20% of individuals report another affected family member. When a first-degree relative has MS, risk increases from 0.13% to 2% to 2.5%. It is slightly higher when a sibling, rather than a parent has MS. Future parents with MS should be reassured that they will not pass their disease on to a child. In contrast they may be able to modify certain environmental factors (eg, vitamin D deficiency, adolescent obesity, smoking, Epstein-Barr virus infection) to lower their child’s risk.

Effect of Pregnancy on Disease Course

Individuals with MS who become pregnant usually have the relapsing phenotype and generally little to no disability.4,5 In this cohort, pregnancy is not associated with a worse long-term prognosis, and in some studies, pregnancy improves prognosis.3 In a multicenter case-control study of patients with a first episode of MS, higher parity for women was associated with decreasing risk for developing a clinically isolated syndrome (CIS).6 Other studies report that giving birth, or even having a terminated pregnancy, protect against MS for at least a 5-year period.3 In contrast, a small study on patients with radiologically isolated syndrome found that pregnancy was associated with a higher rate of new MRI lesion development and clinical conversion.7 This awaits confirmation. There is a lack of data on pregnancy in progressive MS, with a hint that pregnancy impact may be different.8 This too needs further study.

Effects of Disease on Pregnancy

MS is not associated with decreased fertility, spontaneous abortions, stillbirths, cesarean delivery, premature delivery, or birth defects.3 Some studies report that babies of mothers with MS may be slightly smaller in weight and length. The bottom line is that a parent having MS does not put the fetus at risk, and the pregnancy is not considered high-risk. Studies focused on fathers with MS also found no negative impact on the child.

Ideally, pregnancy is planned for a patient with MS. This is important because disease-modifying therapy (DMT) use is strongly endorsed by current practice/teaching guidelines, but using these agents is not recommended during pregnancy (Table 2).9,10 This means that contraception and family planning should be discussed with all women with MS of childbearing age. The goal is to avoid accidental pregnancy. Although decisions are generally left in the hands of the obstetrician-gynecologist, neurologists can encourage use of long-acting reversible contraception (eg, intrauterine devices and hormonal implantable rods). These techniques have the advantages of high efficacy (≥99%), ease of use, and no contraindications with symptomatic treatments used for patients with MS.11

The Centers for Disease Control and Prevention (CDC) recently reviewed contraception use in MS. They found no evidence of harm to patients with MS. They only noted that combined hormonal contraception might be of concern in women with prolonged immobility, due to increased risk of venous thromboembolism.12

Any discussion about prepregnancy planning should emphasize the importance of wellness measures. These include normalizing vitamin D levels, using prenatal vitamins including folic acid, not smoking, limiting alcohol use, and maintaining good sleep hygiene.

Effects of Disease-Modifying Treatment on Pregnancy

Newly diagnosed young women may need to decide whether to start a DMT right away, or pursue pregnancy first. In the MSBase registry, taking a DMT prepregnancy significantly decreased risk for postpartum relapse. The author suggested that initial therapy (for 1-2 years) could be recommended over immediate pregnancy.13 Other factors to consider are the individual’s disease activity level and prognostic profile.

Generally, at least 1,000 human pregnancy exposures are needed to determine that a drug is not detrimental. Those numbers have been reached for interferon-β and glatiramer acetate (Table 3).14,15 These do not require any washout prior to pregnancy, and in fact can be continued during pregnancy.16 There have not been sufficient exposures with other DMTs to draw similar conclusions. However, some experts do not recommend washouts with dimethyl fumarate (due to its short half-life), or natalizumab (due to concerns about return of disease activity).

Pregnancy is an immunotolerant state associated with reduced disease activity, most clearly in the third trimester. Although the relapse rate is 60% to 70% lower than before the pregnancy, relapses can occur during pregnancy and in all trimesters. Recent studies suggest attack rates during pregnancy are in the 15.1% to 22.6% range.19 Women who come off fingolimod or natalizumab to get pregnant are at particular risk, particularly with more prolonged washout.20

MRI scans are considered safe, can be done during pregnancy, and have the advantage of not exposing mother or fetus to radiation.3 The MRI should be deemed necessary and helpful. Use of gadolinium-based contrast is controversial because of potential deposition into CNS tissue. It appears in the fetal bladder 11 minutes after maternal injection, clears into the amniotic fluid, but is then swallowed by the fetus and undergoes gastrointestinal absorption. Guidelines have suggested that contrast be used on a case-by-case basis and only if benefits outweigh the poorly defined risks.3 High-dose corticosteroids can be used to treat a pregnancy relapse during any trimester. Earlier concerns about orofacial clefts developing in the first trimester have not been confirmed.21 Short-acting steroids (eg, prednisone, methylprednisolone) are metabolized by the placental enzyme 11-β-hydroxysteroid, with a fetal exposure that is only 10% of the maternal dose.3 Fluorinated agents (eg, dexamethasone, betamethasone) cross the placenta relatively intact, and should be avoided.

MS is compatible with any choice of anesthetic during delivery, including epidural and spinal anesthesia. The presence of MS should not dictate delivery procedure. The sole exception is the rare pregnant woman with MS who also has significant motor weakness or respiratory dysfunction.

The first 3 months postpartum are recognized to carry risk for increased disease activity. In the older PRIMS study, about 30% of women relapsed during this period.4 The more modern MSBase registry reported that 14% of women relapsed during these 3 months.5 High relapse rate, greater disability prepregnancy, and relapse during pregnancy are associated with increased risk for postpartum activity. In contrast, use of DMTs in the 2 years prior to pregnancy decreased postpartum activity risk. This was the genesis of the author’s recommendation that newly diagnosed women might be advised to go on treatment for 1 to 2 years before trying to become pregnant.

In the postpartum period, women must typically choose between breastfeeding or resuming/starting a DMT. A number of prospective studies, as well as a meta-analysis of breastfeeding impact on postpartum relapses, show no negative effects of breastfeeding. Exclusive breastfeeding (<1 bottle daily), which produces a lactational amenorrhea, is preferred. Interferon-β and glatiramer acetate are believed to be compatible with breastfeeding (Table 3).3 A recent prospective study from the German MS and pregnancy registry found no negative outcomes for infants of women who breastfed while taking these DMTs.22 Other interesting studies report that breastfeeding for an extended period (over 4 months) lowers risk for future MS in the child,23 while breastfeeding for over 15 months lowers risk for future MS in the mother.24 Again, these observations need to be confirmed.

Gadolinium-based contrast agents can be used while breastfeeding. Excretion into breast milk in the first 24 hours is <0.04%, and <1% is absorbed by the infant’s gastrointestinal tract.3 If a mother breastfeeds while on high-dose corticosteroids, the relative infant dose is only 0.71% of the weight-adjusted maternal dose.3 Delaying breastfeeding by 1 hour after corticosteroid infusion gives low infant exposure; waiting 2 to 4 hours limits exposure more dramatically.

Menopause refers to the permanent cessation of menstrual periods. It occurs on average at age 51 to 52. Common associated symptoms include fatigue, depression, cognitive complaints, sleep disruption, urinary and sexual dysfunction, and vasomotor disturbances. A menopausal individual is at increased risk for cardiac disease and osteoporosis. Menopause is not unique to women; men undergo andropause, coincident with a fall in testosterone levels that starts after age 30.

Studies on the impact of menopause in patients with MS are limited.25 Individuals with and without MS experience menopause at the same age. The symptoms of menopause overlap with MS, and individuals have reported worsening of their MS symptoms, particularly in association with hot flashes. This hormonal period coincides with the risk period for secondary progressive disease. Limited studies have found no negative effects of hormone replacement therapy (HRT), which, in fact, improved symptoms and stabilized disability. MS is not a contraindication to HRT, which is used for symptom relief and can be delivered orally, transdermally, or vaginally. Nonoral HRT bypasses the liver. In addition to HRT, serotonin and norepinephrine reuptake inhibitors have also been used for symptomatic relief.25

There may be worsening of the MS disease course post-menopause, but this is difficult to dissect from the toll of aging and progression risk, and further studies are needed.

The prototypic person with MS is a young woman of childbearing age, making reproductive issues extremely important. Pregnancy is the best studied hormonal state, and there are helpful data to guide counseling for prepregnancy, pregnancy, and postpartum periods. Much less is known about menopause. Further study is still needed.

A clinician’s guide to evaluating brain MRI in a patient with improbable multiple sclerosis.

Diagnosis and Monitoring of Patients With Multiple Sclerosis

From the 2017 guidelines to newest modalities.

Key concepts and checklists provide a framework for optimal decision making with patients.

Inflammation in the context of memory loss reminds us of the importance of checking opening pressure on lumbar puncture.

Finding the forest among the trees with an update on the safety, efficacy, and mechanisms of monoclonal antibodies.