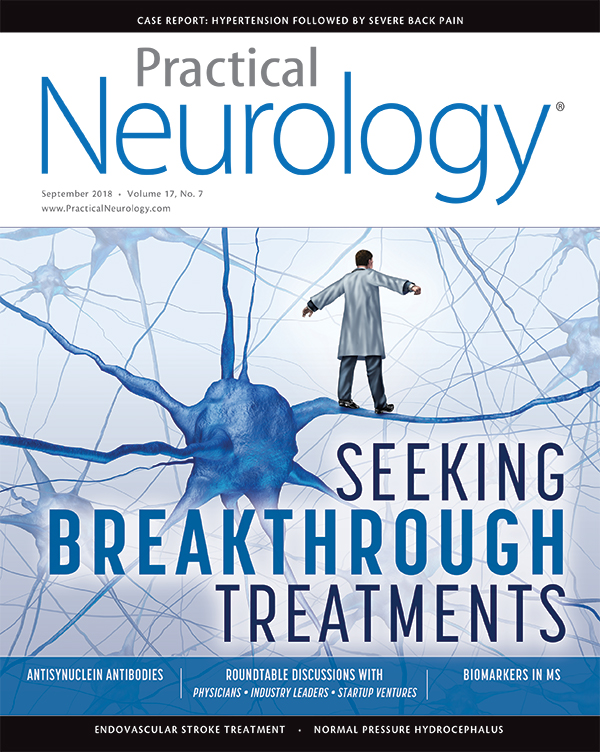 As neurologists, we too suffer from information overload—inundated by alerts from journals, associations, and mainstream media—and are challenged to keep up with the many relevant advances for our field that sometimes come from unexpected sources.

This month we draw your attention to an article in the Journal of Urology1 regarding a study that looked beyond the motor effects of onabotulinumtoxinA (onabotA) on the detrusor muscle when used in patients with neurogenic overactive bladder (NOAB) and multiple sclerosis (MS).

Urinary frequency, urgency, and urinary urge incontinence comprise NOAB. Injection of onabotA into the detrusor muscle is an approved treatment for patients with MS who have NOAB. Although it is understood that onabotA injections weaken the detrusor by blocking acetylcholine release at the neuromuscular junction, little is known about how such treatment affects other neural activity related to NOAB.

The prospective observational study reported on in the Journal of Urology1 followed 12 women with MS, who were clinically stable for ≥3 months before enrolling and had NOAB refractory to behavioral and oral pharmacological treatment. Patients underwent concurrent brain functional magnetic resonance imaging (fMRI) and urodynamic studies. They also completed urinary questionanaires before and after 6 to 10 weeks of treatment with onabotA.

In patients with idiopathic overactive bladder treated with biofeedback, anticholinergic medications, or sacral neuromodulation, decreases in functional activity of brain areas involved with bladder sensations have been seen.

In contrast, in this study, patients with MS and NOAB treated with onabotA had increased functional activity in most areas related to bladder sensation, including the right cingulate body, left anterior cingulate, right prefrontal cortex, insula, and pons micturition center. Decreased activity was seen only in the left cerebellum, left fusiform gyrus, and bilateral lentiform nucleus. The authors of the study highlighted potential reasons for the increase in brain activity, including differences between NOAB and idiopathic overactive bladder, the refractory nature of enrolled patients’ urinary symptoms, functional connectivity differences in the involved brain regions of people with MS, and the larger volume used in the urodynamic studies.

In the patients with MS and NOAB treated with onabotA, there was decreased activation of the amygdala and parahippocampal areas, suggesting that improved bladder control also decreased fear associated with the negative sensations of urgency and urinary urge incontinence.

After Treatment, Closer to Healthy Controls

The brain activity of patients with MS and NOAB changed after onabotA treatment, becoming more similar to that of healthy controls at the time of full urge. Although the authors raised the possibility of differences in functional connectivity between people with MS and healthy controls, this suggests that similar areas of the brain are important in understanding bladder sensation and urinary urgency processing in both groups.