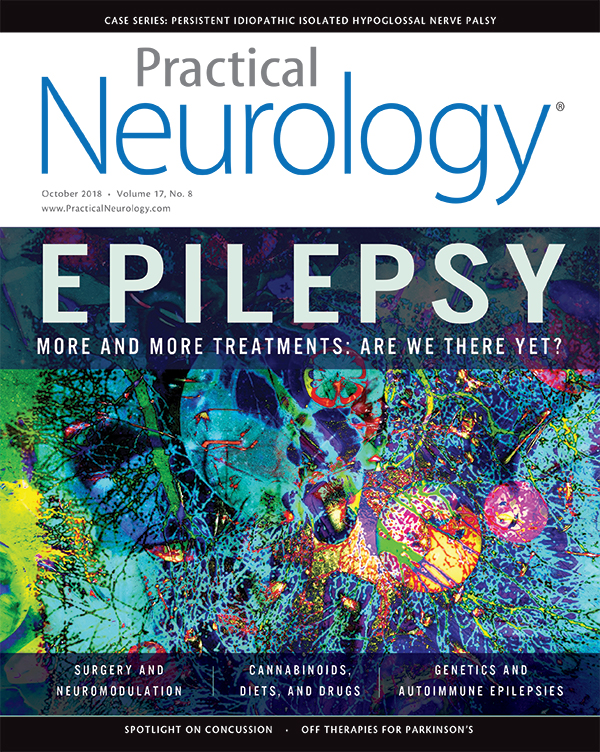 Could this rare condition be related to vascular compression?

A man, age 58, with a history of aspirin-exacerbated respiratory disease and sinus surgery approximately 30 years ago presented with a 6-year history of left-sided tongue weakness that had gradually increased to the point of causing dysarthria and dysphagia to solids and liquids. On physical examination, the tongue was positioned at the midline and symmetric in appearance at rest and with protrusion. Fasciculations were observed on the left hemitongue, and there was left-sided weakness. The rest of the neurologic and physical examinations were unremarkable.

Nerve conduction studies (NCS) and EMG confirmed left-sided hypoglossal nerve paresis. Imaging studies, which included head and neck MRI and MR angiography, showed extensive paranasal pansinusitis that did not appear to affect the course of the hypoglossal nerve. Nasal endoscopy revealed extensive postoperative changes from the prior sinus surgery. Bilateral middle meati obstruction was noted due to polyposis and polypoid mucosal edema, which was more severe on the right than on the left. Fiberoptic laryngoscopy results were unremarkable.

At our most recent follow-up with this patient, his symptoms had been gradually progressing for 6 years.

A man, age 63, with no significant past medical history presented with a 2-year history of tongue weakness, leftward deviation at rest and on protrusion, and mild dysphagia and dysarthria. Although these impairments had been stable for 2 years, there was recent worsening after a viral upper respiratory illness. On physical examination, the left hemitongue appeared atrophic and contracted at rest with fasciculations. There was leftward deviation that increased with protrusion. The patient’s speech was dysarthric. His neurologic and other physical examinations were otherwise unremarkable.

Results of EMG and NCS revealed left hypoglossal nerve paresis. Neither MRI nor MR angiography showed relevant abnormalities at the initial symptom onset or after the worsening of symptoms 2 years later. The same laboratory tests were done as in Case 1 and there were no significant findings.

At the patient’s most recent follow-up, symptoms had again been stable for 1 year since the viral infection, making the total duration of symptoms 3 years.

A man, age 30, with a past medical history of inflammatory bowel disease treated with mesalamine presented with atrophy and fibrillations on the left side of his tongue and a slight change in speech for 2 weeks. He was a body builder and a current 10-pack year cigarette smoker. Having researched his symptoms online, he was extremely worried about the possibility of amyotrophic lateral sclerosis (ALS). On physical examination, the left hemitongue was atrophied with fasciculations and leftward deviation on protrusion. The head and neck and neurologic examinations were otherwise normal. Results of EMG, EEG, and NCS were normal. Initial imaging, which included contrast-enhanced CT, thin-cut MRI along the entire course of the affected hypoglossal nerve, and MR angiography showed no abnormalities. Creatine kinase was mildly elevated (206 mcg/L); all other laboratory results, which included those done in Case 1, were unremarkable. Peripheral hypoglossal nerve lesions are associated with the physical examination findings seen in these 3 cases, including ipsilateral paresis, atrophy, fasciculations, and deviation on protrusion. Hypoglossal nerve palsy (HNP) is most commonly found after a head and neck surgery, trauma, or as an early clinical indication of underlying neoplasm or neurologic disorder.1 It usually manifests with other cranial nerve deficits. Isolated HNP (IHNP) is rare and because 50% of cases are idiopathic, IHNP is often a diagnostic conundrum.2 Most cases of idiopathic IHNP are transient, resolving in a matter of weeks like Bell’s palsy.3,4 Persistent idiopathic IHNP is very rare; a systematic literature search identified only 7 previously reported cases.5,6

Including the 2 idiopathic cases described here, all 9 cases of persistent idiopathic IHNP (4 women and 5 men) had a median age at onset of 42 years with a range of 17 to 76 years. In a review of 245 patients who presented with HNP, 15.1% were classified as idiopathic (1.2% were eventually diagnosed with ALS) but duration of symptoms and whether these were isolated was not addressed.1 Symptoms of INHP may be progressive as in Case 1 or exacerbated, as in Case 2 in which a previously existing cryptogenic condition apparently worsened with a superimposed infection. Figure 3. Sagittal view of the 5 segments of the hypoglossal nerve shown in relation to the internal carotid artery (ICA).

The patient in Case 3 was anxious about ALS to the point that his primary care physician prescribed benzodiazepines. The success of repeated imaging in detecting a likely cause of his symptoms demonstrates the utility of imaging for following up on patients with idiopathic IHNP. To our knowledge, this case is the first in which an etiology was identified after a provisional idiopathic diagnosis for such a long period of time. If a vascular etiology is confirmed, this patient may benefit from microvascular decompression of the hypoglossal nerve, which has reportedly been successfully performed.7

A 5-Segment Model of the Hypoglossal Nerve

In the established 5-segment model of the hypoglossal nerve (Figure 3), each segment tends to be affected by different conditions (Table 1).8-11 Other conditions that can affect any segment include Chiari malformation, Guillain-Barré syndrome,10 sarcoidosis, multiple sclerosis,12 and diabetes mellitus.13 The patients in the cases presented here all received the comprehensive diagnostic workup that has been proposed for evaluating hypoglossal nerve palsy (Table 2),5,14 which effectively excluded the above conditions. For the patient in Case 3, imaging findings specifically denoted a lack of abnormalities in the cisternal segment of the affected nerve. It is possible that a vascular disease process undetectable at the time of initial imaging progressed to become detectable on imaging 13 months later.

Neurologic examination cannot localize hypoglossal nerve lesions; imaging along the entire course of the nerve should be ordered. Contrast should be used for MRI and CT. For MRI, gadolinium enhanced T1W1 sequences are optimal for detecting most hypoglossal nerve pathologies. For CT, addition of contrast improves visualization of nearby vasculature and tumors. Although CT will not show the nerve itself, CT is particularly complementary to MRI in the skull base segment.15,16

Persistent idiopathic IHNP is a rare phenomenon seen in adult men and women of all ages. In the 5-segment model of the hypoglossal nerve, each segment is vulnerable to a relatively specific set of diseases. Case 3, in which an etiology was found, suggests that although transient idiopathic IHNP is comparable to Bell’s palsy, some persistent cases may be more akin to trigeminal neuralgia, which is thought to be caused, up to 90% of the time, by vascular compression.17-19 The numerous cadaveric dissections that demonstrated the frequency of this etiology for trigeminal neuralgia are unlikely to be feasible for persistent IHNP anytime soon due to its rarity.

The authors have no relevant financial relationships to disclose.