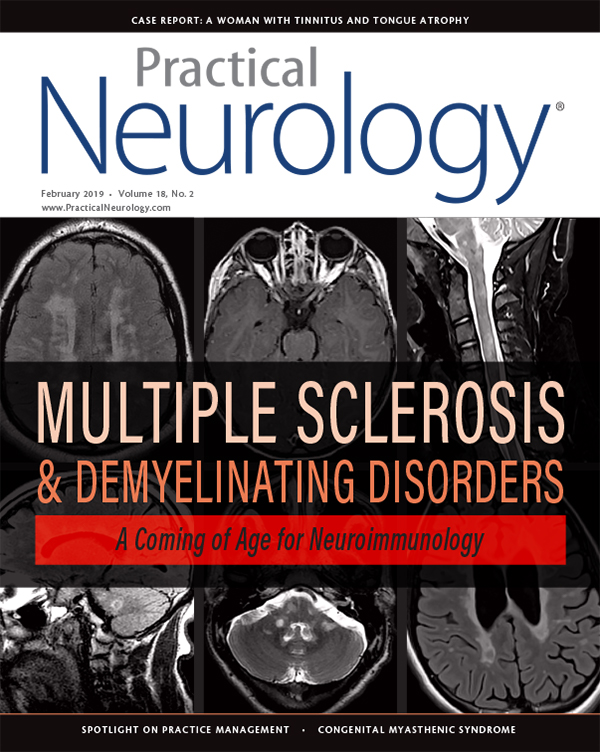 Although there are some congenital myasthenic syndromes (CMS) that have later onset, most present in early infancy or childhood with fatigable weakness of the oculobulbar and limb muscles. In some cases, weakness can be restricted to select muscles. In utero, there may be hypomotility or akinesia. During the neonatal period, infants with CMS may have poor cry and suck, with stridor, choking, and recurrent apnea. Ptosis, hypotonia, and arthrogryposis also occur, and symptoms worsen with activity. These children typically have delayed motor milestones and seldom learn to run or climb stairs well. They fatigue easily and may have difficulty keeping up with their peers in physical activity. Reduced muscle bulk and spinal deformities can be seen. The differential diagnosis appears in Table 1. There is usually, but not always, a family history of the symptoms. Test results for antibodies to the acetylcholine receptor (AChR) or the muscle-specific kinase (MuSK) are negative. On EMG, there is usually a decremental response at 2 to 3 Hz, although this may occur only after stimulation of some muscles and may not appear until after age 2 years.

The CMS have variable etiologies that can be grouped into the location of affected proteins at the neuromuscular junction (NMJ), including presynaptic, synaptic, and postsynaptic proteins as well as those involved in development and maintenance of the NMJ or protein glycosylation at the NMJ. The majority of CMS are due to defects in postsynaptic proteins such as the AChR, rapsyn, plectin, and sodium channels. The next most common causes are in the development and maintenance of the NMJ and in synaptic basal lamina with presynaptic defects being the least common.

Identifying the specific type of syndrome is critical as medications that help patients with certain syndromes may worsen the symptoms in other syndromes. Careful diagnostic workup using EMG, nerve conduction studies, muscle biopsy combined with electron microscopic examination of the NMJ, in vitro analysis of neuromuscular transmission, and phenotypic clinical clues (Table 2) can lead to accurate diagnosis. Although CMS are disabling diseases, when correctly diagnosed, appropriate therapy can improve the symptoms of most patients with CMS (Table 3). Children with acetylcholinesterase (AChE) deficiency typically have severe myasthenic symptoms since birth and may have a slow pupillary light response. Diagnosis may be aided by nerve conduction studies that show a repetitive muscle action potential (CMAP) unaffected by edrophonium. The symptoms are refractory to or worsened by AChE inhibitors.

Children with choline acetyltransferase (ChAT) deficiencies have respiratory distress or apnea at birth or in infancy with myasthenic symptoms. Clinical electrophysiologic studies of neuromuscular transmission show a normal quantal size and quantal release in the rested muscles. Subtetantic stimulation at 10 Hz for 5 minutes reduces the amplitude of the CMAP abnormally, after which there is slow recovery, suggesting that there is delayed resynthesis or vesicular packaging of acetylcholine (ACh).

Mutations of the AChR can affect the expression of AChR and the kinetics of opening and closing of the AChR ion channel so that the channel opens or closes more quickly or more slowly.

A docking protein that interacts with MuSK, Dok7 leads, through intermediate steps, to the anchoring of AChR to the postsynaptic NMJ. Mutations result in structural deficits that cause smaller endplates and a reduced safety margin for neuromuscular transmission. Patients with Dok7 myasthenia have early onset of disease as seen by decreased fetal movements and myasthenic symptoms in the neonatal period or early infancy. Myasthenic symptoms include proximal and distal limb and axial fatigable weakness, facial and eyelid weakness, and bulbar and respiratory symptoms. The course of disease is progressive with spontaneous intermittent worsening. This disease is worsened by treatment by cholinesterase inhibitors but is improved by adrenergic medications.

Rapsyn is a postsynaptic protein that anchors and clusters AChR in the postsynaptic membrane. Joint contractures occur in 25% of patients with rapsyn mutations. Febrile illnesses may precipitate respiratory crises.

Defects in protein glycosylation impair the transport of intracellular peptides by affecting assembly, folding, stability, and solubility of the proteins. Patients with glycosylation deficits have slowly progressive clinically heterogenous presentations with gradual proximal weakening. There may be contractures and a decremental EMG response. On muscle biopsy, tubular aggregates may be seen. Patients with deficits in N-protein glycosylation have more severe disease with hypotonia, seizures, intellectual disability, microcephaly, cataracts, and high mortality.

Plectin is an intermediate filament that helps maintain the shape and structure of the muscle fibers; mutations in plectin cause myofibrillar disarray, filament loss, vacuolar changes, and postsynaptic degeneration.

Although CMS are disabling diseases, when correctly diagnosed, most CMS can be improved with appropriate therapy (Table 3).